Casa Modena completed in November 2013 the restyling of the factory facade overlooking A1 motorway. New and lively interpretation of the front that faces south: 37 large structures properly positioned combine in a balanced and elegant architecture

Light materials and photovoltaic panels give rise to a sequence of always changing images: new rhythm and new energy for Casa Modena along one of the busiest roads in our country. 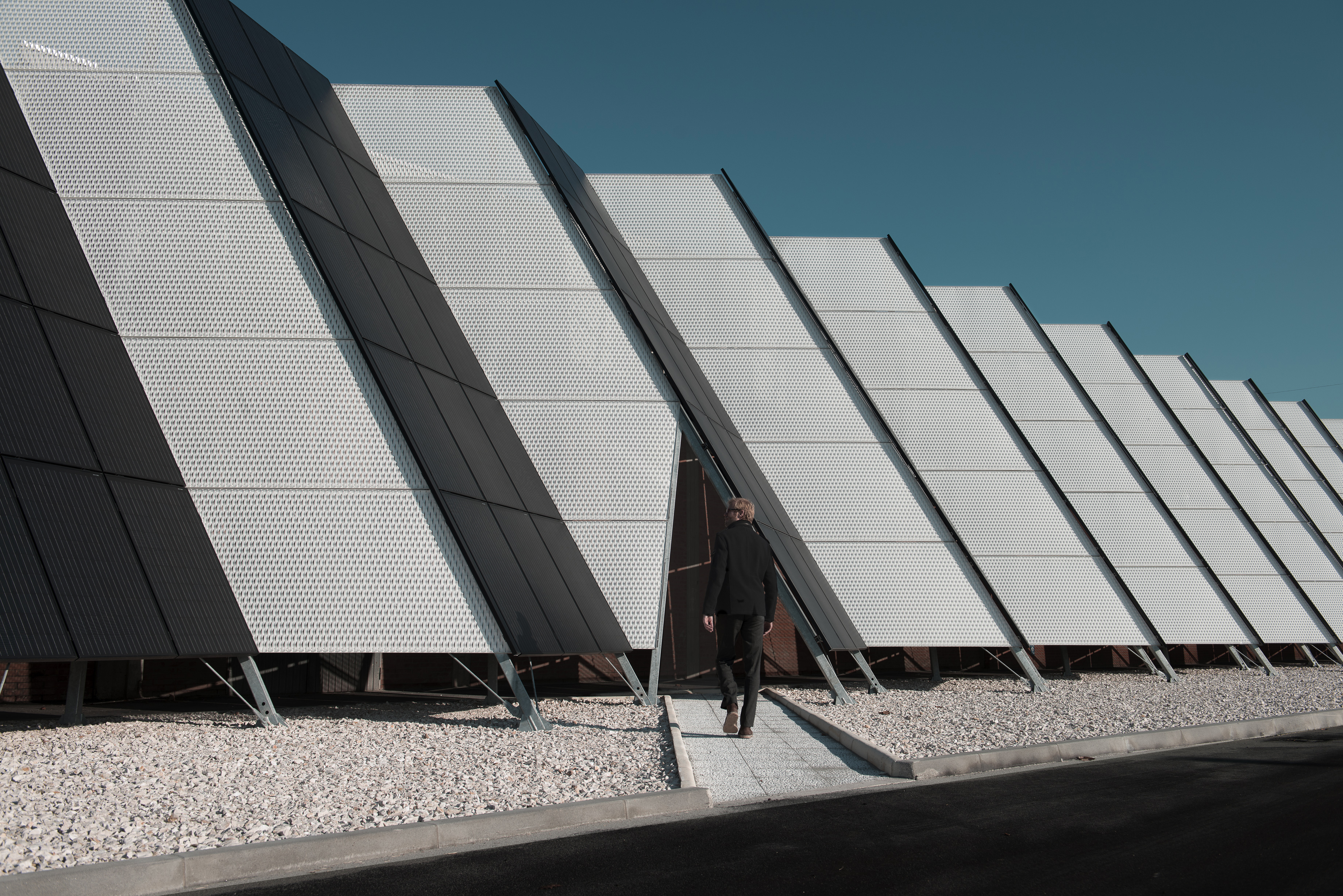 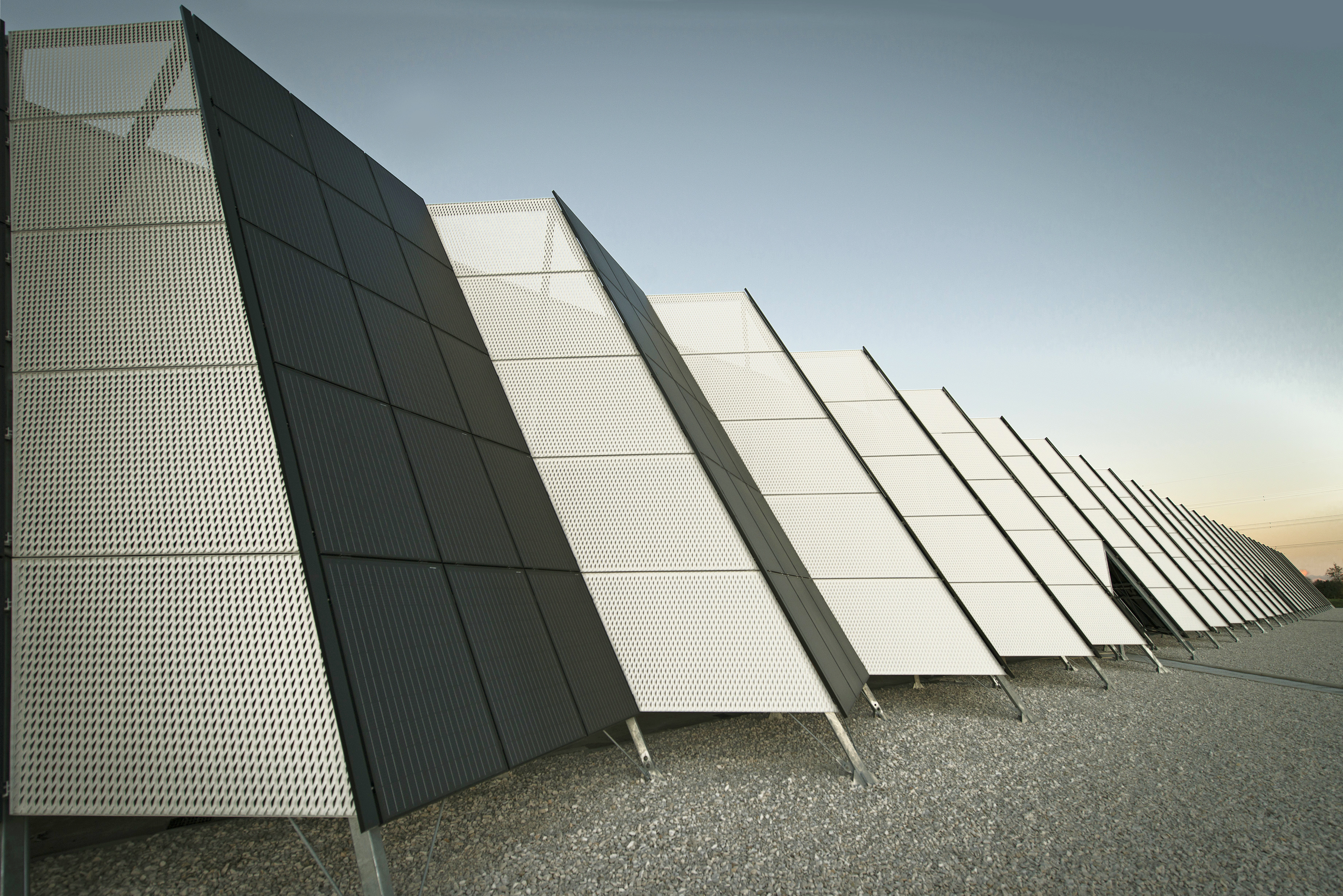 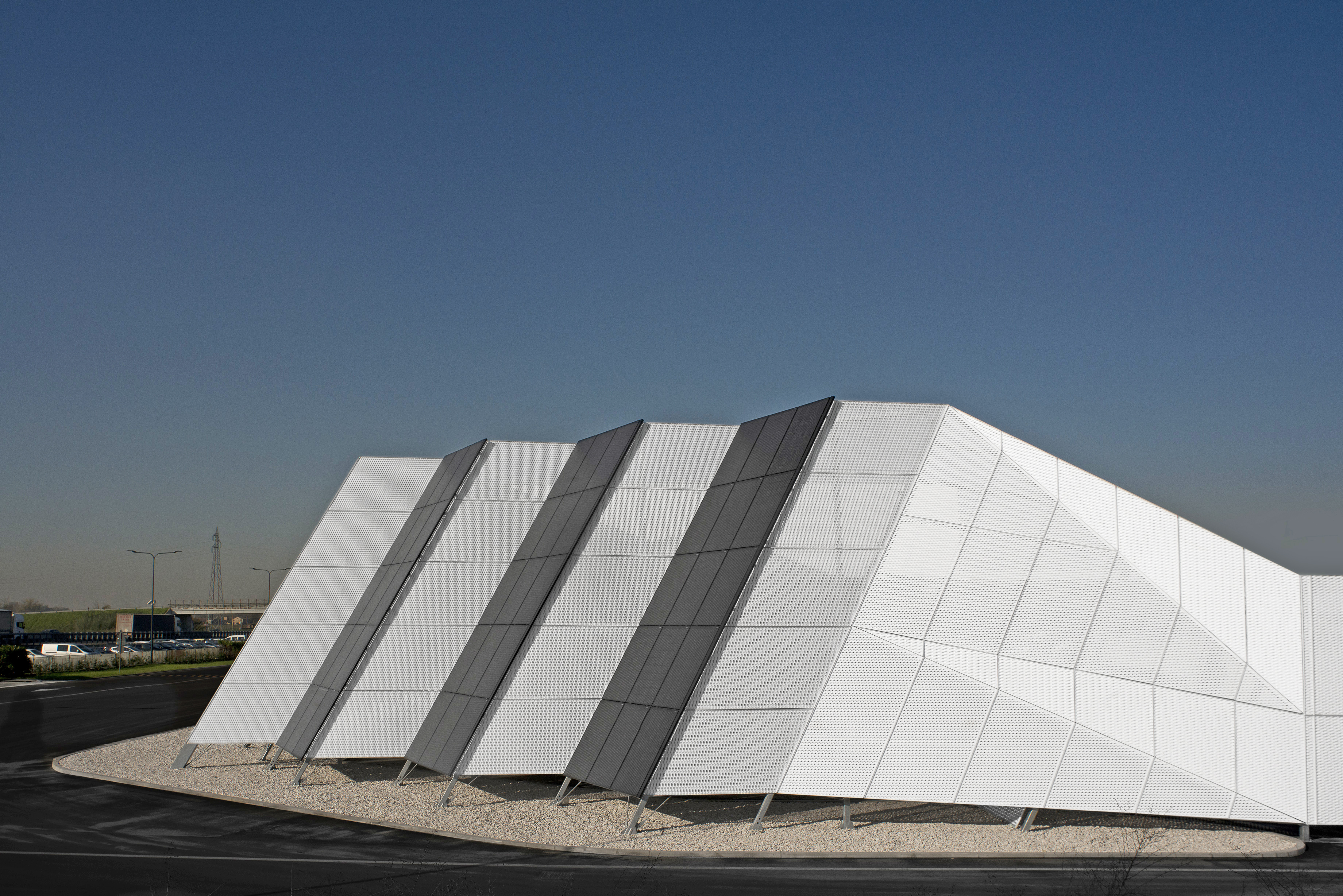 The photovoltaic facade is conceived as a large pleating. This concept is not confined to the level of the architectural composition and its aesthetic restitution: the steel trestles that support the solar panels and all completion materials constitute in fact the pleating itself: the set of the sails, supporting each other in the sequence of inclined plans, form a structure.

The folds make a wind-resistant composition. The base in reinforced concrete acts as a counterweight.

We are looking to a light and economic spacial structure, in galvanized steel. The photovoltaic panels have been properly sloped to optimize solar radiation. 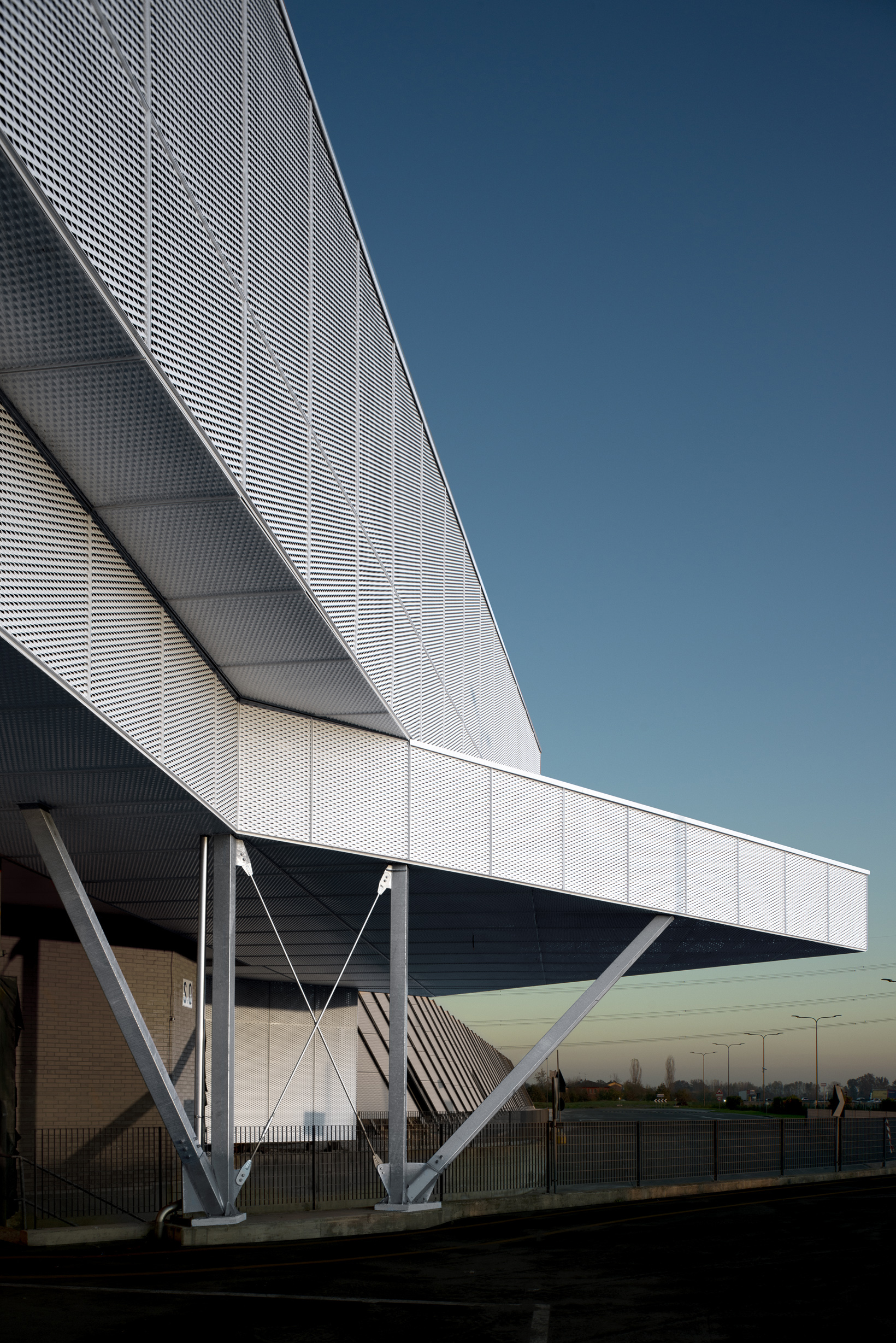 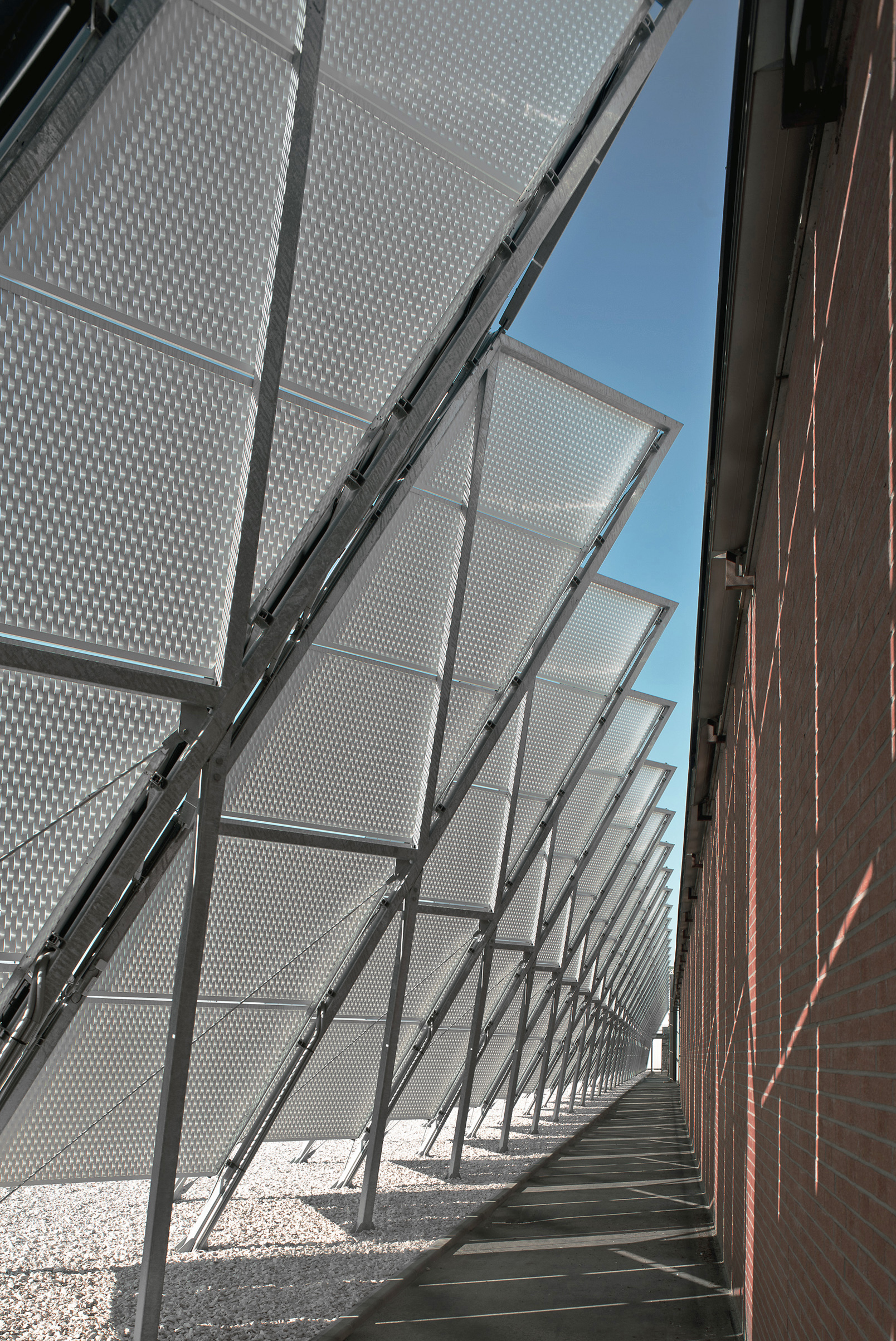 Among the existing facade and the new structure a protected path has been created, dedicated to those who carry out the maintenance and servicing of plants. The facade shows its formal purity, even in themost hidden parts. It is a clean façade in its forms and in the energy it produces. The façade of the project was a good experience of team work.

The search for a sustainable, clean image has given life to a project at a human scale, where every part and every technical and intellectual input ihas been used to compose it all: the structure supports the materials, the materials work for the architecture, the architecture captures light to supply energy, clean energy opens new horizons for the future.

The facade looks dynamic in the movement, for the repetition of its forms and the mutations caused by light contact with the materials that compose it. During the day, over the seasons, according to the observer’s position, it changes its image. Like a large screen of variable message, the building tells and surprises at every new step.